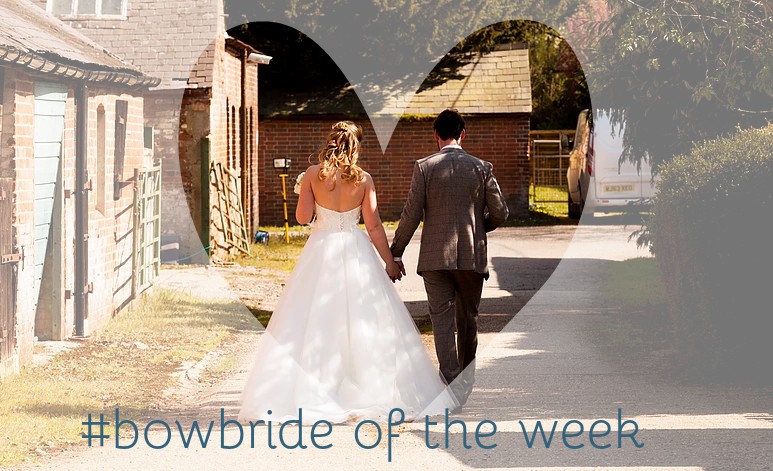 This week we are featuring the beautiful Charlotte who married April this year in Suzanne Nevile with Tom Welsh as their fabulous photographer. 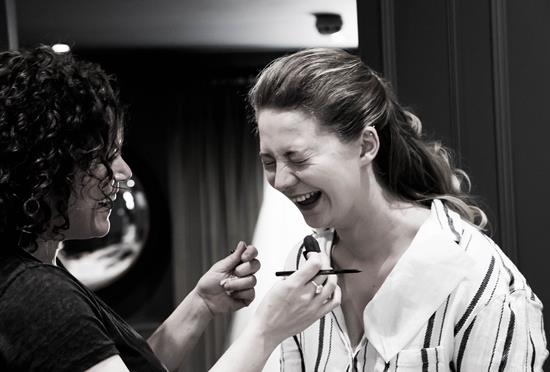 Photographers name and how you choose them

We originally chose a photographer Called Jack Larbalestier. I went to college with Jack, but hadn’t seen him since. I knew that he did a lot of gig photography, and some weddings. When Hugh and I talked about what was important to us with regards to the photos, we both agreed that we are not huge fans of posed pictures, but love natural shots, that really tell a story of the day. In January, Jack emailed me to say that he had been given an amazing chance to go off travelling with his girlfriend, and would be leaving before our wedding. He put forward Tom Welsh as an alternative. Hugh was away on his stag do whilst this was going on, and I had to make the choice on my own. I am so glad that we went with Tom. His style has fit us and our day perfectly! We both love the little shots that we didn’t know he had taken, that are really fun! 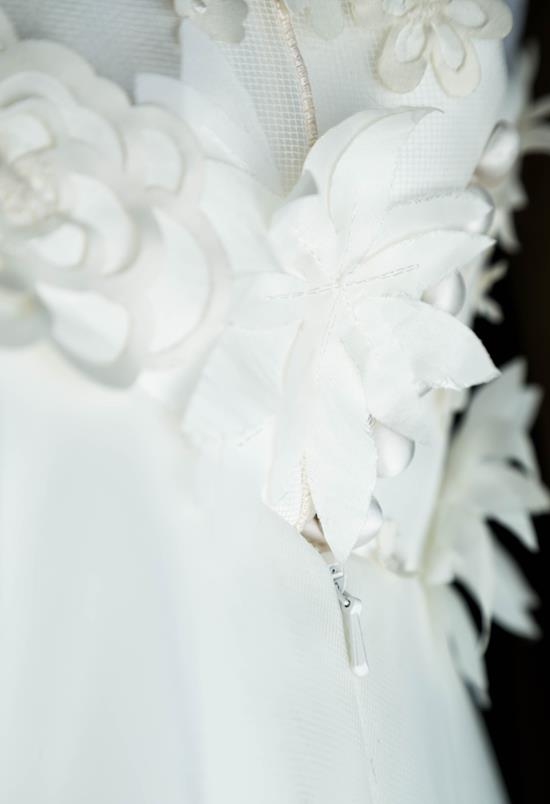 Wedding venue and date and how you choose this

We were engaged for over a year, before the big day. The wedding that I started to plan is a far cry from the one that we ended up having! Hugh’s parents have a farm at the edge of the village that we live in. Two of his three sisters got married on the farm, and there is a field known as the wedding field. We were going to follow suit, but making it slightly different. We looked into tepees, which I love, and would recommend to any one.

That being said, in the end we made the choice to look else where, as the cost and logistics were getting away from us. My parents were keen for us to look at a wedding venue, that was set up for it, but with me being a little awkward, it didn’t hold that much appeal. In the end over dinner one evening, my dad suggested asking the landlord of the farm that we rent our house from if he had anything big enough, and so the grain barn wedding was born. The date was the easy bit, as April is the only month in the year that no one had big work commitments, and by doing it the weekend before Easter break, it meant family with kids could stay a little longer, so we could spend some more time with them. 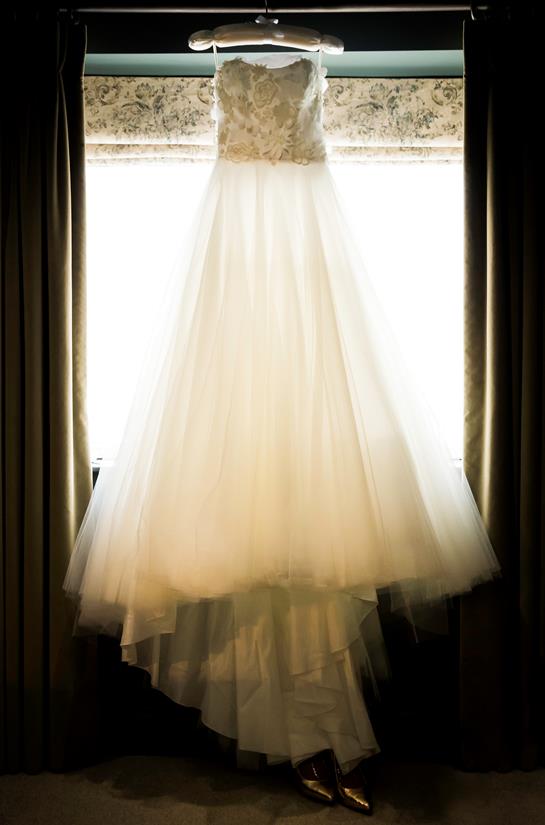 I am not a girly girl particularly, and having a reason to drag me dress shopping and play dress up dolly with me was my step mothers idea of heaven. The irony of that is that, after trying on what felt like hundreds (it was probably no more that 10) dresses, I went with my bridesmaids to see the team at BOW. First of all, any of you who like me, are not shopping fans and have been into wedding boutiques will be familiar with the panicked, I shouldn’t be here feeling – this is something that I just did not get walking in and talking with these lovely ladies. I had chatted with Laura before my appointment, and she had passed on my confused notion of what I was looking for to the wonderful and patient Hayley. After trying a couple of things on, I put on MY dress. It was fun, and didn’t take being a wedding dress too seriously. It didn’t way a tonne, but it was the most beautiful thing I’d ever worn. I was seeing the whole thing in my head, what the dress meant my flowers would look like, what the girls would wear, all of it. After dragging my parents back in pretty fast, the decision was made. I love that it is a British designer, and that it is something a little unusual. 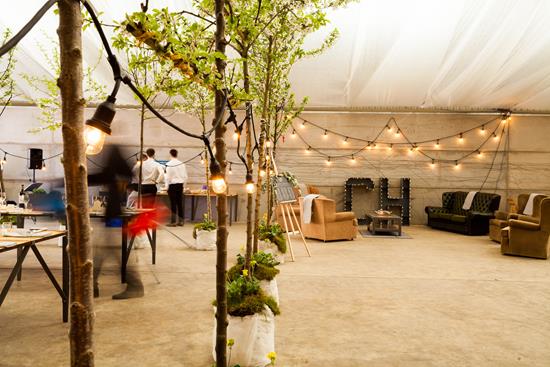 Wedding theme and how you did this

Our wedding theme was venue lead. Once we knew we were dealing with a grain barn, that is all concrete and metal we built it up from there. Our colours were grey (50 shades of) and copper or rose gold. I am an incredibly fortunate bride, in that my husband is an engineer with a creative flare. If there was something that I really wanted, he made it for me. We had huge geometric light fittings hung from the ceiling, wrapped in fairy lights, a copper bar, which is now in my kitchen and giant letters, which we used to light up our chill out area.

During the planning process, lots of people questioned our vision, but we both hung tight to what we had decided on. I am glad that we were both on the same page, and were brave enough to not listen to other people. We used trees to cordon off areas, that were in blossom and hung with festoon lights, we used succulent plants in painted breeze blocks instead of table centre pieces. It was a really hard week to actually build the venue, as we did everything (with the help of our families) our selves, but so so so worth it, when everything was done, and the first few people saw what we had created. 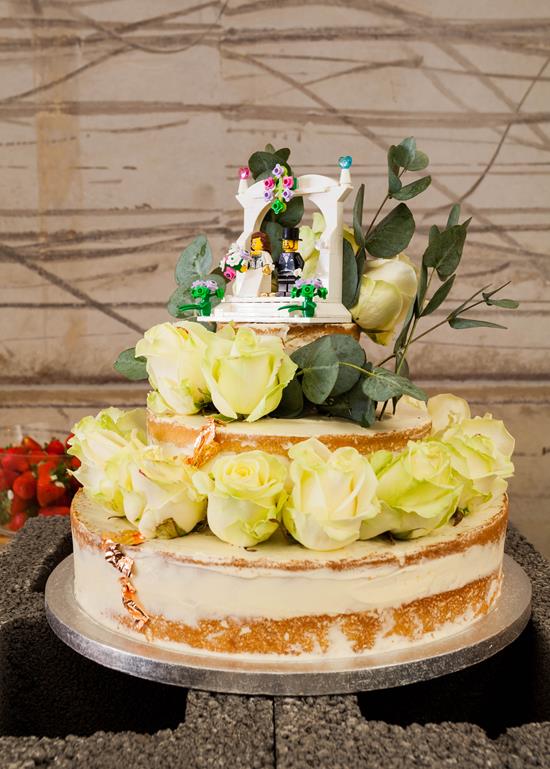 When Hugh and I met, we were about 16. We bonded over the fact that whilst our friends were all listening to radio 1 and current music, we were both convinced we were born in the wrong era. A love of the Goo Goo dolls, and in particular Iris was what made choosing our first dance song so easy. I must admit that on the night, we mainly swayed around and sang at each other, so more of a first daft singing and swaying that a first dance. 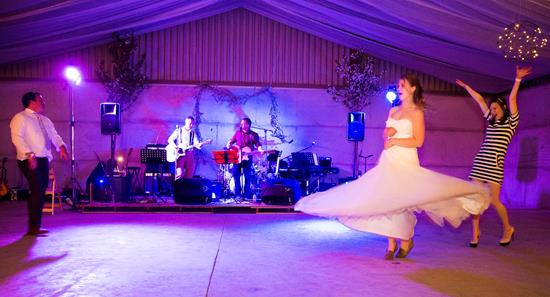 What did the bridesmaids wear

For bridesmaids, I picked my oldest friend, and my closest friend. What I didn’t think about until it got to the outfit buying stage was that they have almost polar opposite styles, both in what they wear and in how much they are prepared to wear what they are told. I had a vision in my mind of tulle skirts and t shirts. That was fairly quickly kiboshed. This was fairly late in the planning stages, so I really had to get a move on. At this point, just when I was starting to get a little worried that they would be naked walking down the aisle, my step mum swooped in and saved the day. She had found beautiful grey blue dresses online in the house of Frazier sale. The girls both had them slightly altered to fit them better, but that is what they wore, and looking at the pictures, they are perfect. Saying that, my girls would be perfect in sacks. 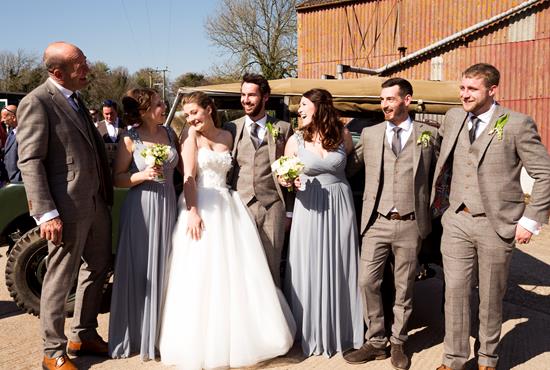 And groom and groomsmen

This was by far and away the absolute easiest choice that we made for the entire wedding. When I was in BOW, Hayley’s wedding album was there for brides to flick through. One look at her groomsmen suits and I was sold. She told me that it was a tailor in Botley called Victor Valentine. So, after a great amount of working out when people were free we all trooped down there. The guys were amazing, and had a fantastic selection of tweeds to choose from. All the boys agreed on the same grey tweed, and the customised their suits so that each one was a little different. I loved them! I know that they will all get wear out of the suits, and I am planning on going back in to have a blazer made for myself as soon as we finish paying wedding bills!! 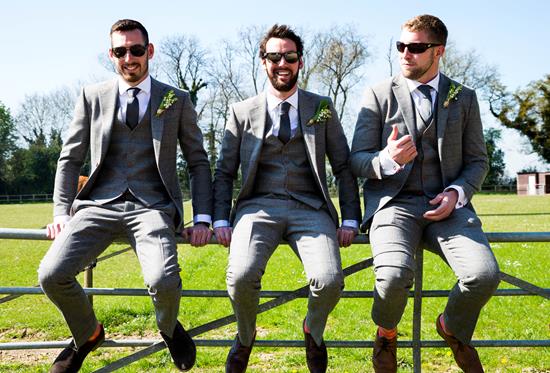 We did our wedding a little bit less than traditionally. On the Friday we went to the registry office in Salisbury to be legally married, we took just our parents and siblings. It was one of the most relaxed days of my life. We have been together quite a long time, and know each other inside out. I never even thought for a moment about being nervous or worrying. I loved having our family around us to celebrate our future. On the Saturday, which we treated like our main wedding day, my only concern was that Hugh had been out with the boys the night before! It was amazing getting ready with all my favourite people around me. When Dad and I got to the venue, and the song I had chosen started (you are the best thing – Ray LaMontagne) sung by Sandy Ince, the best Jazz singer in my opinion, I basically ran down the Aisle to be stood next to Hugh. My dad kept hissing slow down at me!! 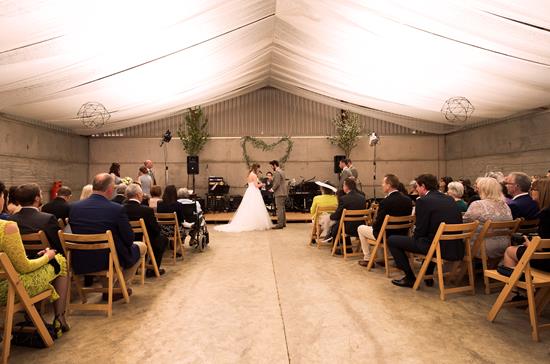 Make the day your own. The things that you, and your guests will remember are the small things that you put your heart and soul into. The bits that are who you are as a couple. My favourite things about our wedding were the things that people looked and were like, oh that is so them. We had bowls of Lego on our tables, as Hugh is obsessed. Our blessing was all created by us, and we wrote our own vows. Everything that was part of our day was a reflection of our personalities. 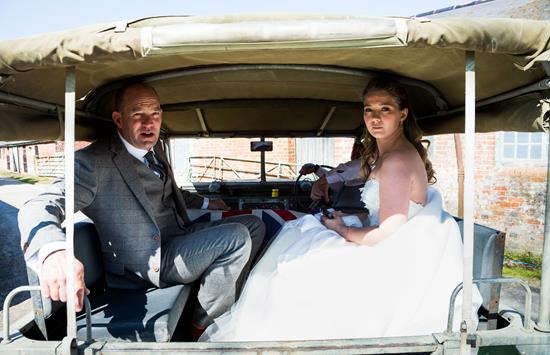 Advise for other brides

It is easier said than done for some people, but do not let anything get on top of you. Planning a wedding can feel all consuming, and you might not want to take other people help – but you need it! Also on the day, take a moment to think about everything that people have done to get you to where you are, not just in the build up to the wedding, but in the build up of your life. The moment for me, was after the speeches, and I was looking around from my perch on the top table, and realised, all these people are here because they love us, and they are part of our lives. They are here for me and Hugh. It was a really warming feeling. 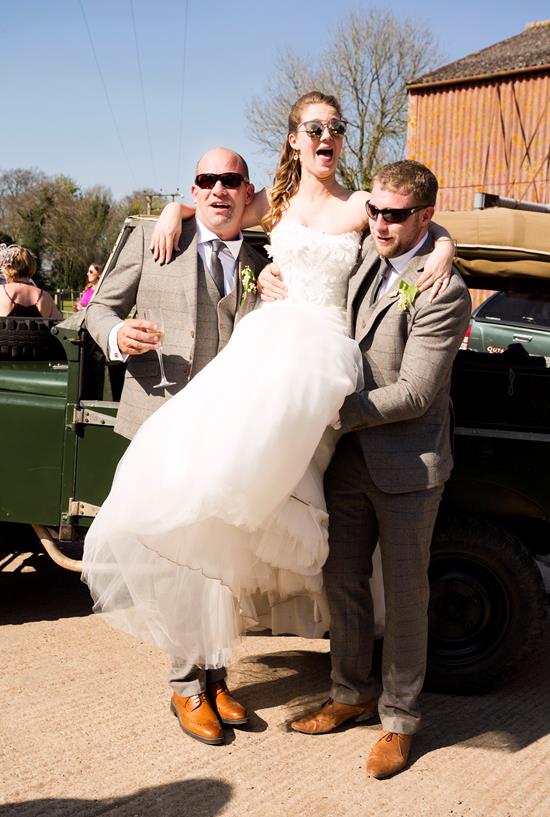 As we had dragged a number of my family from the USA we decided that we would have a few days with them before they went back. 13 of us trooped to the isle of Wight for a family holiday. Whilst they all drive me mad, it is amazing to get to spend time with them. We plan on going away just the two of us for our honeymoon next year. We are both pretty bad at sitting still, so we are thinking of backpacking in Thailand for a few weeks. 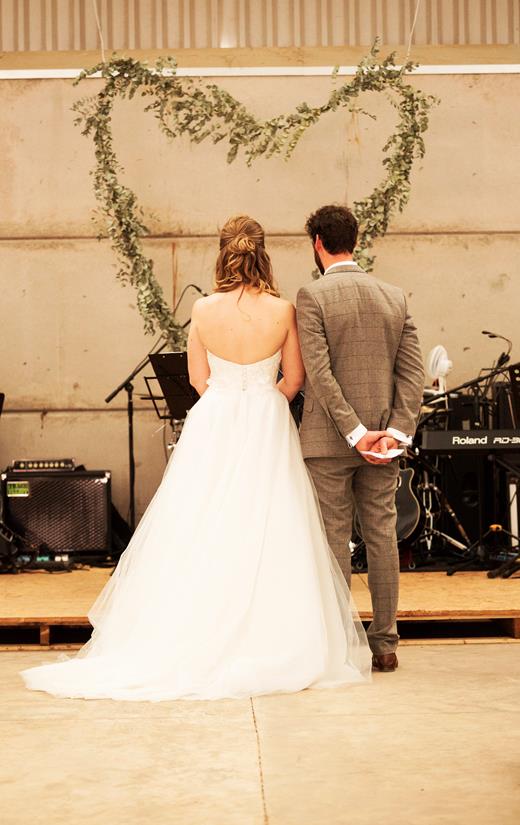 Our bands really deserve a mention here – we had 3. Sandy Ince and her Sticky Toffee Jazz, was the best thing we could have chosen. She did the music during the ceremony, and during our drinks.

We then had two bands in the evening, Run away train, and acoustic arcadia. They really made the evening special. Run away train learnt our first dance song, and Bat out of Hell, my father daughter dance song! Acoustic Arcadia helped me embarrass my brother by learning, and making him join them on stage for Man I feel like a woman. 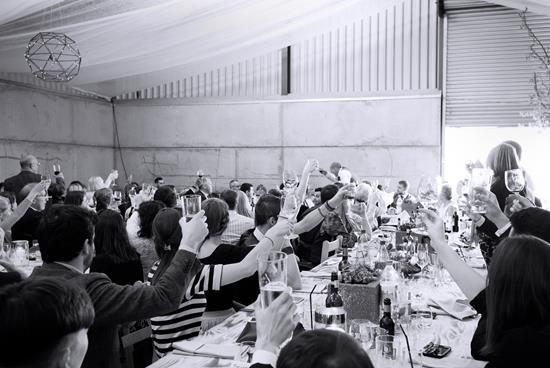